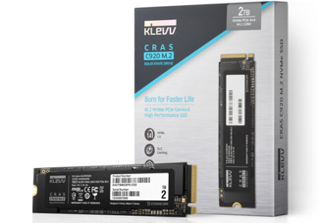 Utilizing the latest PCle 4.0 technology, KLEVV‘s CRAS C920 SSD offers up to 2-3 times the speed of current mainstream PCle Gen3 SSDs. This SSD boasts speeds of up to 7000 MB/s read and 6850 MB/s write and is available in both 1 TB and 2 TB capacities. Compatible with the latest Intel and AMD platforms, the CRAS C920 can help you deliver all of the enhanced performance of the newest chipsets and CPUs. The PCIe Gen 3 x4 CRAS C720 is a smart and affordable upgrade that can raise your system to a new level, with speeds up to 3400 MB/s read and 3100 MB/s write. By using extensive testing and verification, CRAS C720 is able to offer long term reliability. And it is available in capacities from 256 GB to 2 TB to suit all storage scenarios.

What ESSENCORE Had to Say

KLEVV products are distributed by Memory Technology Middle East Fzco/TSSC FZCO in Dubai. All lineups are available at local online/offline channels. For more information, visit the product pages of the CRAS C920 and CRAS C720.